August was the best month so far this year for Tri-Cities commercial real estate (CRE) transactions. Web traffic to local listings was also at a 2020 high. But, the number of deals for the first eight months of the year lagged last year’s market performance, and there was a big drop in inventory.

Office sales and leases continue to be the region’s most active sectors. Office deals were 18.6% better than August last year. The industrial sector was 4.2% better than last year.

Listings in all CMLS sectors were down 34.8% from July, and Flex listings were down 28.8%.

From a numbers perspective, the local market looks soft. But agents are upbeat about what they’re seeing.

Cassie Petzoldt, TCI Group, said there has been a noticeable improvement in transactions, investor traffic, and listings traffic in the past two months. Petzoldt is the chair of the NETAR Commercial Committee. She said her firm is doing more business than expected. She added she is seeing a lot more interest in restaurant listings.

Jay Goodson, RE/MAX Checkmate, agreed on the commercial interest level. He said he is seeing more leases than he expected. He added that he been looking at passive income options in the small multi-family sector. 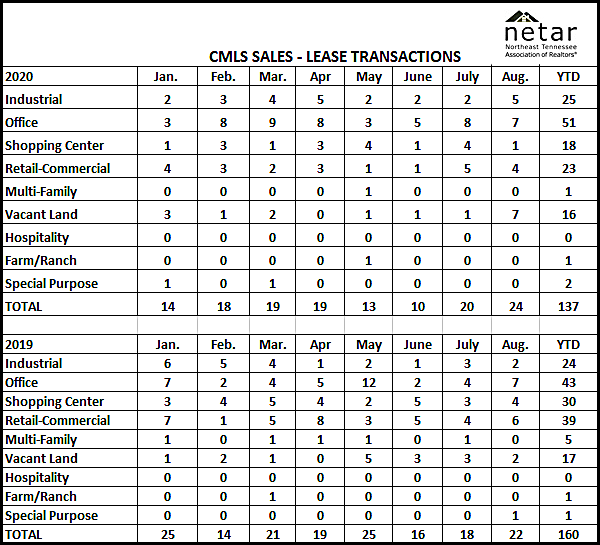 She also thinks the inventory decline is something you have to expect in the days before a presidential election with a higher than normal amount of indecision about the potential business and economic effects. She also says the market should pick up after the election simply because the uncertainty will be over. “Investors will know that they’re working with.”

Shannon Castillo, Mitch Cox Realtors, offered some context to Johnson City reports about downtown businesses that have left or closed.

In an interview she pointed out that some businesses relocated and the ones that closed were “spread too thin.” That’s a reality of what happens during a recession, and it hasn’t been limited to downtown Johnson City.

Kelly Graham, Graham & Associates, was also full of optimism when asked for a Bristol perspective.

He said the Pinnacle continues to add new businesses and there’s increasing interest in other Twin-Cities venues. But most focus is on the upcoming casino election in Bristol, VA.

Graham said investors are positioning themselves in advance of the November election. The casino outcome will have more economic impact on the Twin Cities – and the rest of the region – than the presidential election. Those effects embrace everything from jobs to retail to more expansion of the Twin Cities residential and multi-family sectors.

A recent survey of state business owners and managers found most think the state’s economy will rebound much faster during the next 12 months than the rest of the nation. The University of Tennessee’s Boyd Center for Business and Economic Research said two-thirds of respondents said strong business investment and government leadership would lead to a quicker state recovery.

Some factors in favor of the Tri-Cities economy are:

There  were 348 listings on the Northeast Tennessee Association of Realtors NETAR) Commercial Multiple Listing Service (CMLS) listing last month compared to 534 in July. The current number of listing and change from July are:

There were 346 commercial real estate listing on Flex last month, down two from August last year.

NETAR is the voice for real estate in Northeast Tennessee. It is the largest trade association in the Northeast Tennessee, Southwest Virginia region, representing over 1,600+ members and 100+ business partners involved in all aspects of the residential and commercial real estate industries. Weekly market reports and information for both consumers and members are available on the NETAR website at https://netar.us